Please excuse us while this page is under construction.

Go back in time and discover the history of the SJRA club along with the development of radio. For help navigating the timeline consult the link on the footer of each timeline entry. 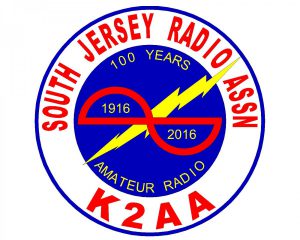 The May NAQCC Challenge, requiring at least one piece of home brew gear, was exactly what I needed to put a recent SJRA club project to the test. Mario Dianora, N2AK, designed and kitted a complete QRP station over the course of a two-year period (2012-2014). The kit was produced for the South Jersey Radio Association, the oldest regularly meeting amateur radio club in North America and celebrating its 100th anniversary in 2016. About 20 club members purchased Mario’s receiver as a first project, which he followed with a 5-watt, 40 meter companion transmitter and a separate frequency counter so we would know where we were...hi hi! The receiver covers the entire 40 meter CW portion of the band, but the transmitter covers only a few kilohertz. I decided to use this station for the first time during the May NAQCC Challenge. The result was 20 logged QSOs from May 6-25 operating only eight days for an hour or so each day. I logged 9 states, Canada and the Czech Republic! Quite a thrilling experience and I was reminded how I got hooked on Ham radio in 1965 when I earned the WN3EIQ novice call sign.

I asked Mario, N2AK, to briefly describe the RX and TX designs. What follows are his descriptions: The SJRA receiver kit is a single conversion superhetrodyne solid state unit that is designed to cover the cw portion of the 40 meter band. It uses a discrete transistor mixer with a varactor-tuned FET injection oscillator. The mixer IF output is fed to a simple 4 MHz crystal filter IF amplifier followed by an SA602 product detector. Audio amplification is provided by an LM358 amplifier for driving headphones. The matching transmitter kit employs a VXO crystal oscillator, transistor buffer and a high-current driver for exciting a class E MOSFET power amplifier. Keying is by accomplished by producing timing signals that permit the VFO to turn on before the final as well as providing a muted audio output for the receiver. The class E final runs near 90% efficiency allowing the DC current to be about 600ma for a 4W RF output, a great feature for battery operation. The VXO is tuned by a varactor diode, controlled by a front panel pot.

Thanks Mario for rekindling our interest in home brewing! And the interest was sparked (no pun intended) in other SJRA members who spent a portion of the November 2012 meeting gathered around tables melting solder and assembling the N2KA receiver kit. I love this little station and am ready to build the next QRP project. Rick Lawn, W2JAZ

In 2003 the International Telecommunications Union (ITU) changed its Radio Regulations to allow nations to decide individually whether to require radio operators to demonstrate proficiency in Morse code. In turn, the US Federal Communications Commission (FCC) decided in December 2006 to eliminate the traditional Morse Code Requirements for amateur radio operator licensing. The effective date of the change was February 23, 2007.

In 1999 the FCC decided to eliminate the 20 words per minute (wpm) and 13 wpm requirements for the Extra and General class licenses respectively, and these changes took effect on April 15, 2000. Many operators rapidly advanced, with the deletion of the 13 and 20 wpm requirements, from Technician Plus to General, Advanced, or Extra; and the ARRL noted a significantly renewed interest in Amateur Radio. Thus with these changes the Advanced, Technician Plus, and Novice class licenses were deemed to be redundant. They were eliminated leaving just Extra, General, and Technician operator grades.

The amateur radio operator grades since 1964 had provided greater operating privileges to higher-class licensees. This procedure was called incentive licensing. The restriction of Technicians after 1990 (to 2000) from the HF bands was mentioned above. In addition, Technician Plus (or Technician before 1990) operators were limited to a narrow portion of the 10 m band and also limited in transmit power. The FCC rules still employ incentive licensing to encourage operators to improve their technical and procedural knowledge, but Morse code no longer is part of the body of capability that provides incentive. Technicians (and holdover Novices) are restricted to the same (SSB) portion of the 10 m band as previously, and are allowed only in the CW portions of the 80 m, 40 m, and 15 m bands. Generals (and holdover Advanced) are allowed on all bands, but have reduced operating frequencies available compared to Extras.

You are being directed to an external site, “www.hamclubonline.com”.